HTML5 has held a ton of promise, and things are much better today than they were a few years ago.  Using HTML5 for some web elements and apps is a good way to go, but can you afford to go all-in?  It appears that Facebook is pulling back from HTML5, and there must be good reason to do so.


There is something to be said about the cross-platform, yeoman-like performance of HTML+JavaScript, and a good reason to build books for the greatest availability options, on all devices.
Posted by Dave at 1:04 AM No comments:

IPads Shunned by Japanese Salarymen Clinging on to Laptops 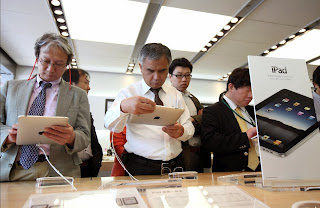 July 27, 2011 (Bloomberg) -- When Yuta Moriya was offered Apple Inc.’s 613-gram (22-ounce) iPad by his employer last summer, he envisioned a future free of lugging his laptop around for client visits. He was wrong.

Salarymen like Moriya are reluctant to embrace iPad tablets, the fastest-growing segment in the computer industry, because they aren’t light enough or functional enough to replace laptops in Japan. For each tablet shipped to corporate customers in Japan, dozens will be sold in the U.S. and western Europe through 2015, according to estimates by Framingham, Massachusetts-based research firm IDC.

“Japanese businessmen already tend to carry around light laptops because they’re on the train so often,” said Masahiro Katayama, a PC group manager at IDC. “IPads are not suited for inputting and processing data, so people end up having both their laptops and iPads.”

An Apple spokesman in Tokyo referred queries about Japanese iPad sales to Softbank Corp., the iPhone maker’s partner in Japan. Fumihiro Ito, a spokesman at Tokyo-based Softbank, Japan’s third-largest mobile-phone carrier, declined to comment on its iPad sales in the country.

Tokyo salarymen prefer lighter, sleeker products because space is so scarce in a region with 36 million inhabitants. Some hotels offer lodging in coffin-sized capsules instead of rooms, and typical whiskey bars in the Yurakucho and Shinjuku districts are only big enough for about a dozen customers at once.

According to Tokyo-based Kakaku.com Inc., Japan’s largest price-comparison website operator, Acer Inc.’s 1.23-kilogram Aspire one D250 AOD250-Bb18 ranked highest in customer satisfaction among laptops purchased in the past year. “Portability” was one of the characteristics considered.

Four of the five top-rated laptops weighed less than 2 kilograms, according to the website.

By comparison, four of the five “most wished for” laptops on Amazon.com Inc.’s U.S. website weighed at least 2 kilograms. All of the top five in Amazon’s U.K. site weighed more than 2 kilograms.

“In the U.S., it’s clear what the iPad offers with its size and weight, but in Japan, iPads fail to distinguish themselves as a business tool from lightweight laptops,” said Ichiro Michikoshi, an analyst at research firm BCN Inc. in Tokyo.

Gulliver, which has distributed about 300 iPads to employees, isn’t giving up on tablet computers. It plans to give out 1,500 more in the summer as part of a company-wide transition to tablets, said Noriko Mitsui, a spokeswoman at the used-car dealer chain.

Tablet computers are more suitable for watching movies and listening to music than writing reports and crunching data on spreadsheets, Michikoshi said.

Most business users in Japan who purchased tablet computers found them less useful than they initially expected, according to an April survey of 450 workers by research firm IID Inc. Of those polled, 88 percent said they bought the product expecting to use it for work.

That’s the dilemma facing Kokuyo Co.’s information-technology department. The Osaka-based furniture maker planned to give away 1,500 iPads this year to boost productivity yet has only handed them out to 251 employees, all of whom are still using their laptops, said Jun Enda, one of the workers receiving one.

“The iPad on its own isn’t enough to get work done,” Enda said, citing difficulty in typing e-mails and using spreadsheets.

As companies such as Kokuyo and Gulliver face difficulties adopting tablets, corporate shipments of the product in Japan are projected to grow at a slower pace than the worldwide average.

Shipments in Japan will climb at a compounded annual growth rate of 54 percent to 430,340 units by 2015, while growth will average 89 percent to 7.9 million in the U.S. and 96 percent to 6.8 million in western Europe, according to IDC.

Worldwide, tablet computers, led by the iPad, are the fastest-selling products in the $263 billion PC industry, according to IDC. That helped Cupertino, California-based Apple deliver record earnings and boost its market value to the world’s second-largest behind Exxon Mobil Corp.

The tablet market is poised to jump almost fivefold over five years to $53 billion by 2015, according to IDC.

The world’s third-largest economy matters enough to Apple that Japan is the only country where sales are regularly disclosed by the company. The world’s largest maker of tablets and smartphones generated $1.51 billion in sales from Japan during the third quarter, or 5.3 percent of overall revenue.
“Tablets won’t drive away mobile PCs,” said Yukihiko Shimada, a senior analyst at SMBC Nikko Securities Inc. “Tablets are good for browsing, but they are not suited for business as it is hard to use them to produce something.”

Japanese electronics makers are seeking to meet the preferences of salarymen and other domestic consumers. NEC Corp. began selling its 699-gram LifeTouch NOTE tablet, featuring a keyboard, in March.

Sharp Corp. launched its Galapagos line of tablets in December, aiming to attract domestic consumers by offering models as light as 220 grams and sporting a trackball so users can hold the product on one hand during train rides.

Those functions still aren’t good enough for Moriya, the salesman at Gulliver, who gave his iPad back to the company earlier this year after a three-month trial.

“The iPad really looked light and convenient in Apple’s commercials,” Moriya said. “But carrying an iPad on top of a notebook and brochures was really annoying.”

To contact the editor responsible for this story: Young-Sam Cho ycho2@bloomberg.net.
Posted by Dave at 11:50 AM No comments:

On Wednesday, the Los Angeles Unified School District (LAUSD) told Apple that it would not accept any further deliveries of Pearson curriculum, which Apple has been providing as part of a $1.6 billion plan to give every student in the nation's second-largest school district an iPad. LAUSD also asked for a “multi-million dollar refund” for software that had already been delivered, according to local public radio station KPCC.

$1.3-billion project crashes and burns as new superintendent shelves it

In 2013 the school district signed an initial $30 million deal with Apple in a program that was supposed to cost up to $1.3 billion. As part of the program, LAUSD said it would buy iPads from Apple at $768 each, and then Pearson, a subcontractor with Apple, would provide math and science curriculum for the tablets at an additional $200 per unit.

Not a month after the pilot program launched, students were found disabling app and browser limitations on their tablets. A month after that, LAUSD reported that a third of the 2,100 iPads distributed during the pilot program had gone missing. A year later, media investigations revealed possible malfeasance in securing the contract with Apple and Pearson by LAUSD superintendent John Deasy. While Deasy has denied wrongdoing, he recently stepped down from his position and his successor, Ramon C. Cortines, has said he will scrap the program.

Before the program is scrapped, however, it seems LAUSD will try to get some of its money back. In a letter to Apple's general counsel this week, David Holmquist, the school district's attorney, wrote that LAUSD was “extremely dissatisfied” with Pearson's product.

"While Apple and Pearson promised a state-of-the-art technological solution for ITI [Instructional Technology Initiative, LAUSD's internal name for the iPad program] implementation, they have yet to deliver it."

"As we approach the end of the school year, the vast majority of students are still unable to access the Pearson curriculum on iPads," Holmquist wrote according to KPCC, which obtained a copy of the letter.

In his letter, Holmquist also said that the district "will not accept or compensate Apple for new deliveries of [Pearson] curriculum."

According to the Los Angeles Times, LAUSD teachers never fully embraced the Pearson curriculum, and this week the school district placed an order for new math textbooks that the Pearson software was supposed to replace.
Posted by Dave at 11:21 AM No comments:

This is an interesting article by Miral Sattar (BiblioCrunch), who suggests that self-publishing isn't as cheap and easy as many people seem to think it is.  It can be, but quality often dictates that several people get involved in the process, from copy editors to marketing folks.

Of course, at DEC Publishing, we think that the digitization of the book is the easiest part of the process and likewise, should be the least expensive component. Good content requires an investment in both time and money.  Making it available to everyone doesn't.

Interesting article out of O'Reilly, Tools of Change.  There are great points with regards to how a PDF page is still preferable over formatted pages, because of the difficulty (and necessity) in keeping a complex page layout.

I agree with the points made, but what if there is another option, which takes the best of PDFs, but strips away the problems (no DRM, compatibility problems, accessing one page requires opening an entire [potentially large!] document, etc...)?

I think there are other options that the write may not know about.  BookOnPublish, of course, is one such option worth exploring.
Posted by Dave at 10:42 AM No comments:

Here is an interesting article about the decline of eReaders.  It seems that people are going after multi-use tablets, rather than cheaper, single-use readers.

Two studies predict that as few as 7 million readers may ship by 2016, down significantly from 20-30 million in 2011. More reason than ever to make digital books which are accessible on all devices, rather than locked to one platform.
Posted by Dave at 8:21 AM No comments:

iPad Losing its Grip in Japan

According to an article in the Asahi Shimbun (Japanese newspaper), research company BCN announced on Nov. 7th (2012) that sales of Android Tablets have surpassed iPad sales for the first time, in October, in Japan.


It attributes much of this to the Nexus 7, which entered the market at the end of September, 2012.  The affordable price of the Nexus 7, at 19,800 yen, seems to be the determining factor for many people.  The market share for Android tablets in October stood at 58.1%, whereas the iPad came in at 40.6%.


Amazon's Kindle Fire, to be priced at 12,800 yen, is on its way in December.  Other tablets, including those running Windows 8, will soon follow suit.

iPad's stranglehold on the tablet market is expected to end very soon, according the Eiji Mori, BCN analyst. 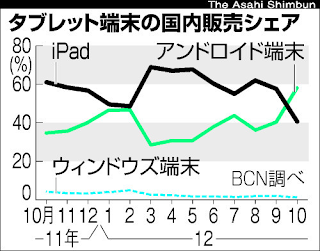